Skip to Content Jump to Main Navigation Skip to Search

You Are Here: Antineutrinos for Arms Control 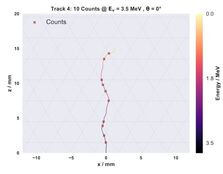 A large amount of nuclear fuel has been produced in applications of nuclear energy in the past decades. The waste contains significant quantities of plutonium, a key ingredient in the production of nuclear weapons and, thus, in addition to the high toxicity, it also presents an important proliferation risk.

The dominant radioactivity of the spent fuel stems from long-lived beta-decaying elements like, e.g. 90Sr and 137Cs. Weakly interacting elementary particles called antineutrinos are emitted in beta-decays. They can propagate through a significant amount of shielding material without being attenuated. This is simultaneously an advantage, in contrast to other potential signal particles, but also a challenge for designing antineutrino detectors.

We are investigating the use of two antineutrino detection techniques: imaging liquid argon and organic liquid time projection chambers. They could provide an unprecedented precision in reconstructing antineutrino interactions, their incoming directions, and would have a remarkable spatial resolution which is needed to filter out background events. These technologies are presently being proposed, developed and validated by the neutrino physics community, thus aligning the nuclear verification efforts with the forefront of fundamental science.